Albanian emigrants tend to move to Greece and Italy, two countries hat were affected severely by the Great Recession. It comes at no surprise then, than the number of return migrants increased sharply after 2008. 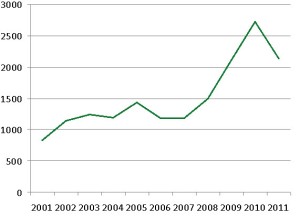 Now, we don’t know whether this is really due to the economic situation in Greece and Italy, or whether there was simply an increase of individuals who had planned to return to Albania during that period from the onset.

There are two ways to address this. We could ask the returning migrants, which is what Maroukis and Gema (2013) have done. They suggest that most of these returnees look into re-emigrating in the future: a temporary return to Albania. Perhaps we could call this circular migration.

Another way is to compare the countries from which Albanians are returning. We can see that the number of returnees has increased for those returning from Greece (green) and Italy (blue), but there was no equivalent increase for returnees from Germany (light green) and Switzerland (red).

This corroborates the qualitative studies. The number of Albanians who planned to return was probably stable over the period considered. What has changes is that for some (Greece, Italy), the economic situation has put a — temporary — halt to their life projects. For those in countries less affected by the Great Recession, the migration projects are not affected.