Presenting regression analyses as figures (rather than tables) has many advantages, despite what some reviewers may think… 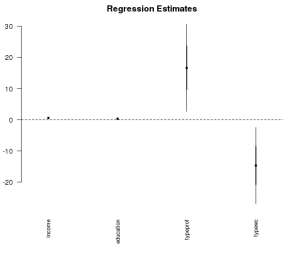 tables2graphs has useful examples including R code, but there’s a simpler way. There’s an R package for (almost) everything, and (of course) you’ll find one to produce coefficient plots. Actually there are several ones.

The one I end up using most is the coefplot function in the package arm. It handles most common models out of the box. For those it doesn’t, you can simply supply the coefficients. Here’s the code for the coefficient plot shown. The first two lines are just to get the data in case you’re interested in full replication.

The default in arm is to use a vertical layout, so coefplot(m1) works wonderfully. Often I prefer the horizontal layout, which is easily done with vertical=FALSE; I also add custom margins so that the variable names are fully visible.

If I want to plot the coefficients of a model not supported, like Cox Proportional Hazard survival models, all it takes is to supply the coefficients. The coefplot function takes many arguments as we would expect it. Here’s an example. I supply the coefficients and SD as required (using subsets from the results), specify the variable names, and set the limits of the y-axis. In this example, I specify the columns with the coefficients [,1] and the SD [,2]. Specifying variable names is something I often do, because we don’t want to communicate using our (internal) variable names; even I find myself struggling to understand what some variables stood for when I get back to old results after a few months. Usually there is no need to specify the limits of the axes (ylim), but I included this here to show that the function takes many standard arguments, and because if we compare different models this can be useful. Speaking of comparing models, running coefplot a second time with add=TRUE does just this.

There’s also a dedicated package for coefficient plots called coefplot, but somehow it often failed me. There’s also Ben Bolker‘s coefplot2; it requires installation with the following code (it’s not on CRAN):

You might also be interested in the visreg package. Although it doesn’t do coefficient plots, it visualizes regression analyses so that you can see the data alongside the results.

Finally, for those happy to code in R, have a look at the figures (and code) by Carlisle Rainey. That’s nice for polishing the results for publication, but seems a bit complicated for a first look at the results. Indeed, even if we go for the table in the end, doing coefficient plots are a very useful tool for us researchers to understand the analyses we run, actually see what these figures amount to!

P.S. There are also legitimate reasons to keep the table, of course, but that’s something for the supplementary file.