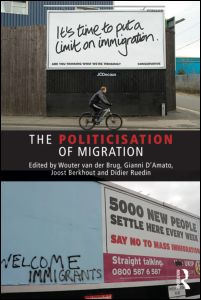 I’m very happy to announce that the book The Politicisation of Migration is finally out! The book unites work from all researchers involved in the SOM project and examines how and to what extent immigration has become politicised in the seven SOM countries between 1995 and 2009. With a joint theoretical frame on politicization and de-politicization, the book goes beyond mapping variations across countries and time.

This edited volume addresses questions like: Why are migration policies sometimes heavily contested and high on the political agenda? And why do they, at other moments and in other countries, hardly lead to much public debate? The entrance and settlement of migrants in Western Europe has prompted various political reactions. We find that in some countries anti-immigration parties have gained substantial public support while in others migration policies have been hardly controversial.

One Reply to “The Politicisation of Migration: Out Now”