I’m very happy to announce the publication of a reader on migration and discrimination by Rosita Fibbi, Arnfinn Midtbøen, and Patrick Simon. The reader comes in at some 100 pages and is completely free and open access at the IMISCOE/Springer website.

Some readers may want to skip the chapter making a case for research on migration and discrimination, but for others will find a well justified and researched overview why this topic is important!

We get an overview of key concepts, key theories, and a discussion of different measurements. All these in a more comprehensive way than what research articles can offer, yet in an accessible way.

In my view, the chapter summarizing discrimination across social domains comes in a bit short. Thinking ahead how this reader can be used in a course, though, I guess this is fine, since most course providers probably want to put a focus on the empirical evidence anyway and will pick more detailed studies of these weeks.

The reader is then completed with sections on the consequences of discrimination — again a part that could have been longer, but again a part where course providers will have their own preferred material to complement the book. The chapter on combatting discrimination is a summary of classic strategies, but does not discuss some more recent ideas how discrimination can be reduced or overcome.

Overall an excellent and nicely put together resource that many will want to use in their courses or just read themselves! Download your copy now…

Political representation is usually understood to be about groups: left-wing parties represent people with left-wing views (“substantive” representation), female MP represent women in the population (“descriptive” representation). When Matt Golder and Jacek Stramski examined ideological congruence, that’s what they did, too. They included a footnote to outline the possibility that individuals are represented by a parliament as a whole, but seemed to dismiss this perspective as irrelevant in practice — this was the same comment I got from an examiner once when still working on my doctorate. This did not discourage me to write up how to conceptualize and measure individual representation in 2012.

collective representation: how well do parliamentarians collectively represent citizens, e.g. how well are the views of the citizens in a country represented in their legislature?

direct representation: how well does a single MP represent a single citizen, e.g. does the president of a country represent the views of this particular person?

individual representation: how well do parliamentarians collectively represent a single citizen, e.g. how well are the views of this particular person represented by their legislature?

Individual representation is expressed as a score for each individual. Rather than combining views and looking at averages or distributions, we consider the position of an individual citizen. To keep the information of all citizens, we first compare the position of each citizens vis-à-vis the positions of the other citizens. This gives us a measure of “marginality”. The intuition is that individuals are aware of their position among citizens to some degree, and a person with far-left views will not expect to have his or her views represented in a legislature if everyone else is centre-right or far-right. Similarly, a person with centrist views will expect his or her views represented in a legislature when many other citizens have centrist views. This is the comparison at the top of the figure. 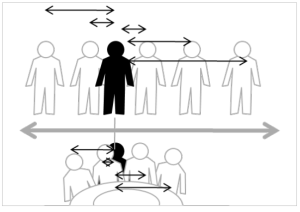 We can then simply compare (=subtract) the marginality among citizens and the (imagined) marginality among representatives to derive an individual representation score. Normatively, we assume that smaller Euclidian distances are “better”. This is an important note, because we could also assume that an individual only cares about having “perfect” direct representation through one MP. When moving beyond single issues, I think most individuals will cease to have a “perfect” direct representative who shares their views on all dimensions exactly, and considerations of minimizing positional distance will play a role.

Just back from the annual IMISCOE conference, I was struck once again how often we talk about (civic) integration (of immigrants) without a clear notion what we actually mean by it. What is more, it’s become a mantra to insist on integration being a two-way process, while this is not a logical necessity. A while ago, I have written up my position in a COMPAS working paper.

It is possible to use standard statistical methods to determine integration: it’s a matter of determining whether two groups differ in relevant dimensions, or whether the position of an individual is within the typical range of values.

Where the working paper ends is the political question: what dimensions are relevant? To answer this question, it would be necessary to map out specific visions of the society we aspire. Clearly there’s no single (objective) answer to that one.

Re-reading some classics in the study of attitudes to foreigners or immigrants, it hit me how often we still rely on education when we mean skills. While education and skills tend to be correlated to some degree, the two are not quite the same. It is then surprising to see how many contributions rely on education when their theory of competitive threat and material interests really is about skills. Yes, often we only have education in the survey data we rely on, and indeed the results may indeed be similar irrespective of whether we use education or skills, but shouldn’t we be a bit more careful with the conclusions we draw when all we use are proxies? (especially when we rely on average levels of education, continue to make the assumption that all immigrants are low-skilled, or when we assume that respondent have a typical immigrant in mind when we ask about “immigrants” in the generic sense in a survey, rather than say asylum seekers).

Pecoraro, Marco, and Didier Ruedin. 2015. ‘A Foreigner Who Does Not Steal My Job: The Role of Unemployment Risk and Values in Attitudes toward Equal Opportunities’. International Migration Review Early View: 1–53. doi:10.1111/imre.12162.

It feels rather obvious when put this way, but it’s usually harder when it comes to multiple regression models. So often we throw in a control variable like “foreign national” or “foreign born” without thinking why we do so, what alternative explanation we think we are capturing. Obviously, a person’s passport or place of birth is used as a shorthand or proxy of something else, but what exactly?

Let’s consider the commonly used variables of migration background or migration origin. Short of calling a particular section of society different in essence (which we probably don’t want to), there are a range of concepts we might be trying to capture, like the experience of (racial) discrimination, having a different skin colour, having a different religion, holding different values, having poor language skills, being of the working class, having additional cultural perspectives and experiences, transnational ties, or a combination of these.

Knowing what we’re after is essential for understanding. Sometimes it is necessary to use proxies like immigrant origin, but we need to specify the mechanism we’re trying to capture. Depending on the mechanism, who should be counted as of immigrant origin, for example, can be quite different, especially when it comes to children of immigrants, individuals of “mixed” background, and naturalized individuals. Having poor language skills, for example, is something most likely to affect (first generation) immigrants; but likely experience of racial discrimination is probably not disappearing just because it was my grandparents rather than me who came to this country.